The winner of the Nobel prize for literature was to be announced at 1PM today, and as people probably know by now it went to the Swedish poet Tomas Tranströmer.

But around noontime this fine hoax page went up: 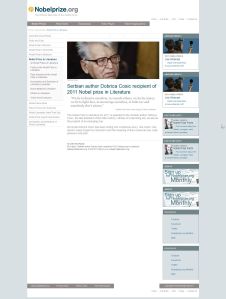 The wags registered it to a site called “nobelprizeliterature.org”, and made it look fairly persuasive. The links to other parts of the Nobel machinery all led to the (genuine) official site at nobelprize.org. According to the hoax, the Nobel prize for literature was to be awarded to political dinosaur and lugubrious father-obsessed memoirist/novelist Dobrica Ćosić. In language meant to echo the self-congratulation of the „Serbian Tolstoy“, the page invited viewers to think of him as „the last dissident of the 20th century“ (the fellow loves to call himself a dissident, and was promoted as one in every single regime he loyally served).

Good fun! But it doesn’t stop there. The state television network RTS picked up the story and reported it as true. But no surprise there, they have a longstanding reputation for credulity. So did the tabloid Večernje novosti, but it’s the same story there. But Radio B92? The story was up on their site, where it caused a brief panic on social networks, for all of fifteen minutes. After which a long tajac fell, followed by a weak and belated apology.

Now this was big, not so much because of the devious cleverness of the hoax – after all, Ćosić is as likely to get a Nobel as Jackie Collins is – as because of what it shows about journalistic reflexes and how they change. Every news outlet has put out unverified stories at some point, and when people think it is big news but are not entirely certain the decision about whether to go ahead or not depends partly on critical professional judgement built through years of experience, partly on a realistic assessment of probability, and partly on what folks just plain wish was true. When B92 was an independent station operating under the slogan „Don’t trust anybody, not even us“, the first two factors would have prevailed and the third would not have entered into the equation. You know what made the mighty fall? Their might.

The satirists at Njuz.net got it about right when they found out that somebody else was publishing the fake and improbable news that they were supposed to be making up. Their story had an editor of the satirical site explaining, „We understand the desire of the B92 portal to amuse people with absurd and invented news stories, but at the same time we insist on basic journalistic ethics which should be respected“. It’s a pretty good summary of the role of satire at a time when „serious“ outlets are parodies of themselves.

Credit for the hoax was taken after the fact by an anonymous group who above a poem by Danilo Kiš posted the explanation that their goal was „to bring to the attention of the Serbian public dangerous influence of the writer Dobrica Ćosić”. On the one hand you could say that this offers a little bit of a mixed bag: they teased him, but then while they were doing so they drew more attention to him and continued the long tradition of inflating his importance. On the other hand, if the joke was to work as a political intervention, it had to rely on the assumption that as long as people are talking about Ćosić they are saying bad things. This might be a good assumption.

Update: A frequent ironic comment on the news has been “what does Basara say about this?” No problem, here is what Basara says.