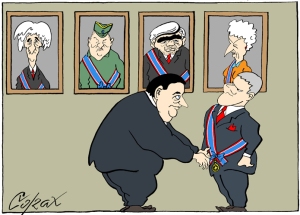 This time the comment was made by Čedomir Jovanović, at the congress of the political party he heads. He wanted to make clear some unpopular facts about Serbia’s foreign policy in the region, and especially its failure to build a constructive relationship with Bosnia and Herzegovina. Jovanović and his Liberal Democratic Party (LDP) see the country’s closeness to Republika Srpska and confrontation with the central government as a losing game, built on denial of a difficult reality. So Jovanović decided to give it to them straight: don’t pretend their history is better than it is, don’t take their medals, don’t bless them, don’t pretend that the interest of the people is what folks were told it was in 1992. “Republika Srpska was built on genocide committed in Srebrenica, the largest committed since the Second World War,” he told his party members.

Recognition where it is due: the comment was courageous and truthful, and in the context of the whole speech offered a vision of how much better life could be in the region if politicians in the country would take an honest look at the recent past and what the national interest genuinely involves. But reality check 1: the politicians will never do that. And reality check 2: a bunch of people got angry. One group of people announced their intention to a file a lawsuit, saying that Jovanović had “offended all the Serbian victims” of something they got the neat idea (Freud much?) of calling the “Defensive-Fatherland war.” Not to be outdone by some verbally creative extremists, RS president Milorad Dodik said that Jovanović was “attributing collective responsibility to a whole people” and accepted a challenge to a public debate that was organised by the Tanjug news agency today.

Dodik’s main purpose was to repeat points that he had tried to establish ceremonially at the “twentieth anniversary” of RS (which was recognized as one of the two legal entities in Bosnia and Herzegovina shy of seventeen years ago, not twenty – that is, after the war and not before it): that RS was not founded on crime, that it was the victim of aggression, that there was no genocide in Srebrenica. He played a bit with numbers too, escalating the number of victims from the Serb villages around Srebrenica. There are 119 victims documented by IDC, at one point RS began claiming there were 600, then the late Milivoje Ivanišević doubled it to 1200, and in his TV appearance Dodik raised it to 3500. On the question of genocide, he spun an unusual historical web, in which he said that he “recognised” (konstatovao) that ICTY and ICJ had found that genocide occurred, but that he had never “recognised” (priznao) that the finding of fact was factual. As they say, ko razume shvatiće.

The moderator tried to give Jovanović the opportunity to find a common ground with Dodik, suggesting that his comment had been “taken out of context,” that it was “not directed against Republika Srpska as a collective but against the relation between Belgrade and Republika Srpska.” No dice, Jovanović said: “That sentence has a certain weight, and I do not intend to try to reduce that weight.” That made for a promising beginning. He gave himself a big job to do, to explicate the weight of history and what it has to do with political conflicts today. It would be hard to say that they got far past that beginning, though.

So why did the discussion not get so far? A lot of people will say that it because of the limitations of the participants. They would not be wrong, but there is more at stake here than a couple of public personalities who some people like and some people do not like.

How to describe the exchange? You don’t need to trust my description.  There is a video of it here and there is a partial transcript at LDP’s site, but they sadly seem to have decided to post the remarks of only one participant. So check it out and judge for yourselves. My impression is that once the two participants set out their initial positions the discussion deteriorated.

Partly this was the fault of Dodik. Although he is very wealthy and quite powerful, his populist inclination leads him to adopt speech and behaviour patterns that are just barely this side of rustic and abrupt, a style more suited to the birtija than the conference table. Considering that a good part of the viewing public was probably inclined to agree with him, it’s a great style for TV: walk away from content, offend people, and justify it with the standard line about not being “politically correct.” The broadcast went on for about 80 minutes, and as it went on Dodik resorted more to personal insults and repeating slogans. He snorted and smirked and interrupted. Did he leave Jovanović’s mother out of it? Silly question, what kind of Dodik would do that?

So does this mean that Jovanović emerged a hero? My impression is that he did not help himself a lot. He has a tendency to wander from topic to topic in the space between the beginning and ending of his sentences. He has a tendency to shout. He falls into unfortunate rhetorical constructions that result in unintentionally insulting exaggerations (“Bosnia is not a state, it is a cooking pot!” Uh huh, great.). He waves his arms when he gets excited. He confuses his own stature and reputation with the issue under discussion. All these things amount to mortal televisual sins in a context where at least half of the audience dislikes him to begin with and the point he needs to make is more important than he is.

So what did we find out? We found a lot about Dodik, as if we wanted to know: he makes claims and comparisons he knows are false, he dislikes both Belgrade and Sarajevo, he strangely has a thing about people who enjoy good ćevapi. He thinks that “Karadžić has his mistakes,” and that this is a meaningful admission. We also found out, as if we did not already know, that an effective answer to the kind of rhetoric Dodik uses is not more rhetoric of the same type. Jovanović got in a good one when he asked “Where has your politics led? To a war against Angelina Jolie!,” but the answer to misrepresentations is still facts rather than one liners. It seemed like the good guy’s shouting did less for the audience than the bad guy’s muttering.

It would be possible to take this analysis in a personal direction, to trace the problem to Čedomir Jovanović and the imbalance between his good impulses and courage on the one hand as his deficiencies as a spokesman for the position he advocates on the other. But that is a little bit pointless; however well or badly he is doing it, and whether he is the right person to be doing it, he is doing the good work. There is just not a lot of choice here.

The problem is more in the background fact that made it so painful to watch the shouty gesticulating guy take on the lying lummoxy guy. The issue is not about two personalities, or two political parties, or any kind of boxing match or duel. Any discussion of who won or lost – and there are lots of them on both sides, all of them claiming that one of them “smashed” or “tore apart” the other – misses the point that what is happening is not a fight or sports match. It is a misfired response to the need for people to know and understand what happened in the recent past, which still exerts a very strong influence on their life in the present. The shouting and insulting that political leaders do only show that political institutions do not have the capacity to meet that need.

Milorad Dodik never wanted to free people from that burden. Čedomir Jovanović quite possibly would, but for a whole complex of reasons is not able. Together, they just make it heavier.