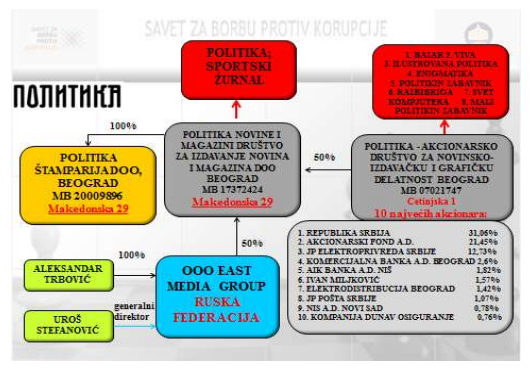 Everyone will tell you, Politika is the oldest newspaper in the Balkans. They say it is influential too, but this is probably an exaggeration. Of the remaining people who actually read newspapers, more seem to prefer the lurid tabloids chock full of conspiracy theories (Politika does okay on that count) and assorted body parts of people who are recognisable from television. So what is the grey mass good for? Well, like “newspapers of record” in other countries, it is a place where editors perform the boundaries of what officials think people ought to know about, where respectable-seeming people give a pretty gloss to whatever line of thinking is dominant at the moment, and where folks who want to cement their wobbly positions in some future elite display their fetishes. It also has a surprisingly good –literate, diverse and comprehensive – arts and culture section on the weekends. Ah yes, and its weather predictions and death notices are impressively accurate.

Politika’s editor, Ljiljana Smajlović, has developed a habit of entering and leaving that job in strict covariance with the strength of her political connections. Last week she caused a minor subset of exquisitely tweezed eyebrows to raise when she announced her resignation. Her obliquely worded letter informed readers that:

and suggestively notes that:

…real editorial freedom does not exist in those places where the editors have been completely disempowered and the management acts without control.

There is nothing in the text, or in the ones that followed, that specified how she was prevented from independently editing the paper or where those places are where the management acts without control (or, more importantly, who this “management” is). So nobody will be surprised that the decision was followed by a lot of speculation. A bit about the speculation below, but there is something more fascinating.

As soon as the editor announced her resignation – as a part of the same article, in fact – the paper, which she continues to edit, began a campaign with the goal of persuading her to change her mind or for the resignation not to be accepted. Early on in the campaign, it was joined by the Association of Journalists of Serbia (UNS). This wholly independent organisation offering its support to Ljiljana Smajlović is headed by Ljiljana Smajlović. It competes for authority with the Independent Association of Journalists of Serbia (NUNS).

Today is, as those of you follow calendars will already know, Sunday. This is the day when newspapers put out larger editions that stress their chosen themes for the week, and Politika is of course no exception. The lead story is about high school students choosing to go into trades rather than continuing their education, but the columns on the side tell you all you need to know about the paper’s priorities: two essays of praise for the editor and her stellar character, and sandwiched in between them an interview with the leader of the main ethnic Serb party in Croatia, mostly about EU accession. So who is praising Smajlović now, and what are they saying?

The leading item comes from sometime film director Emir Kusturica, who made exactly two good films (one in 1981 and one in 1985) and then spent the next thirty years marketing predigested stereotypes about the Balkans to an inexplicably delighted French public. Recently he made news by claiming that he is the victim of an endless witch hunt  (fun fact: in the Balkans they hunt witches by hurling massive quantities of public money at them). Today he says in a text that is mostly hyperbolic praise for the editor that Politika is:

Simultaneously in the service of freedom and of the state

In difficult moments it is apparent who is a hero and who is an eccentric poltroon and how much a wise editor can in turbulent moments be helpful to our cause. And our cause is founded on the state and on principles, but also on freedom!

So, there you have it. Freedom.

Kusturica’s effort got reinforcement from the curious Željko Cvijanović, a journalist with an interesting/uninteresting past whose main activity has involved trying to make the shift from being Radovan Karadžić’s in-house mouthpiece to securing a similar position in a recognised state. Cvijanović makes an appeal for the state to resume ownership of the paper, which would presumably guarantee that regardless of the character of any government, it would continually maintain its subservient ideological role.

A few other people got into the act. There’s Matija Bećković, a fellow who always wanted to the national poet in the spirit of Constantine Cavafy or Vaso Pashë Shkodrani, but who is notable principally for wearing a funny hat. For good measure and completeness, here are a couple more – one guy who prescribes Politika for the maintenance of psychological health, and one who compares its quality to the other things you can buy at a kiosk (chewing gum?).

What is fascinating about the whole publicity campaign, in which the editor who resigned has for days dedicated large chunks of the front page to people “spontaneously” begging her not to resign, is that no ordinary reader will be able to discern what it is about.

Is it about politics? Who knows, but I will say probably not. Politika has traditionally been a place for people close to state structures and the political right to market their opinions, and is not in the habit of straying from that position much. When it does it is in the direction of more pronounced extremism, and the role of Politika in the 1990s in promoting the rise of Slobodan Milošević and his quasilegal elite, together with ethnic hatred and violence in general, has been thoroughly documented. In that regard Ljiljana Smajlović has continued, with a slightly larger dose of respectability, in the footsteps of her predecessor Dragan (“Electricity”) Antić.

One of the characteristic features of Politika under Smajlović has been a series of feature columns by a rotating cast of writers (none of them are very good, and none of them lasted very long) attacking writers for independent media and a whole set of personalities associated with the long-dormant “Other Serbia,” a loose association of anti-war and anti-regime intellectuals from the 1990s (I wrote about them here a while ago) . The most recent assemblage of texts involved a series trying two present two live historians and one dead philosopher as “autochauvinistic.” In short, there is nothing in the political direction of the paper under its editor that sets it apart from the dominant tone of media in the country, which has nothing that sets it apart from the dominant tone in the 1990s, except that then the offerings were more diverse. Emir Kusturica may think Politika is “critical,” but you could fit the things that Emir Kusturica thinks into a couple of heavily subsidised fake historical sites.

So to the degree that politics is involved, it is not anything that anyone would recognise as substantive politics. This is partly because in an environment where everything is about politics it is equally true that nothing is about politics, and partly because due to the successful work of Politika and similar outlets over the last few decades, there is no substantive political disagreement about anything in the media mainstream.

There may well be another kind of politics involved, however, if we keep in mind that the politics of media is business and that the business of politics is media. As the state council against corruption in Serbia warned several times (twice in 2011, here and here, and once in 2015 here), major media in the country are owned by unknown actors, shell companies, and networks with no mechanisms of accountability. Since the German publisher WAZ decided it wanted out of the domestic marketplace in 2010, it looks as though an assemblage of political entrepreneurs and economic operators have been trading back and forth. This happens in an environment in which the government shows evident favour to a few media outlets whose editors have personal connections in positions of power, and where there is an occasional effort to bring discipline to the rest.

The whole vague business with an editor resigning, engaging a campaign to prevent her own resignation, and assembling a gaggle of dubious figures to intervene is probably best understood outside of the context of substantive politics and inside the context of “deep” politics where lucrative favours are traded. But the promise of understanding does not amount to much after years of assiduous effort to keep the facts unknown.